In the games room of the „Landgräflichen Stiftung“, 30 kids and teenagers together with their carers are excited about a new table football worth 1.000 Euro. It is donated by Infastaub.

At every trade fair, Infastaub brings along a table football. At the fair stand, it is a proven meeting and communication point.

Together with a few teenagers of the „„Landgräflichen Stiftung“ the table football was carried to its new destination. Pleasure was great among the kids and teenager when the table finally reached the games room. The home residents directly played a first match.

„Often, just one table football was not enough and the kids had to wait for their turn. Therefore, we  are very happy about the donation of Infastaub. Especially since it is a tournament edition which we can use for a very long time“, says Dagmar Heidel, Physical Instructor of the institution. 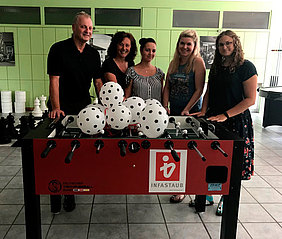 You find the market place for used filter units here.

Sign up here for our newsletterand make sure to receive free tickets for our trade fairs.